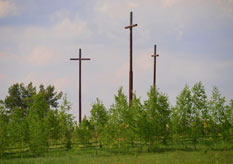 Three tall, wooden crosses atop a hill overlooking the village of Jasień form the "Golgotha of Jasień". These crosses were put up on October 26, 1994. The largest cross stands 14 meters tall with the remaining two crosses measuring in at 9 meters tall. There are also huge limestone and sandstone boulders at the hilltop, carried there from nearby fields, and benches which can be used to rest and admire the view.

Each year on the penultimate Sunday of May, Way of the Cross ceremonies are being held at the Golgotha of Jasień. It is a procession to commemorate those fallen during World War II in the region.