Assumption of Mary and St. Augustine Church in Kurozwęki 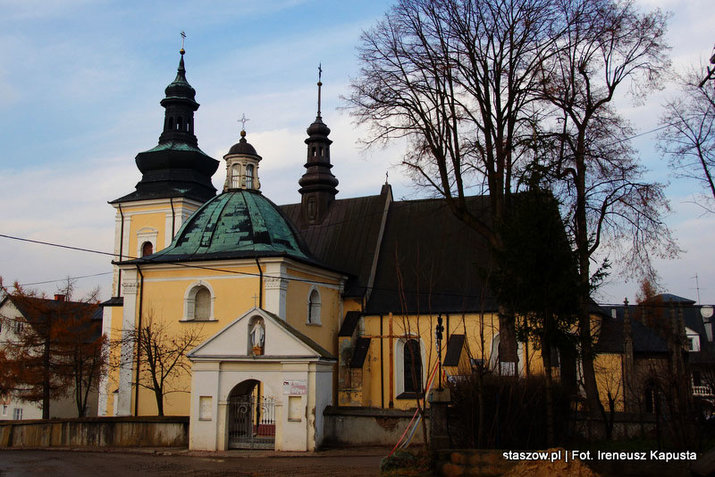 Kurozwęki is a village located seven kilometers from Staszów. Records of its existence date back to the 13th century. The Assumption of Mary and St. Augustine Church is a particularly noteworthy building in Kurozwęki. Local parish was created in 1347. The church in its brick-and-stone form had already existed in the year 1470. Since 1487 it served as a parish church and as a temple for Canons Regular of the Lateran – the monks were brought to Kurozwęki from Kraków by Chancellor of Sandomierz and Treasurer of the Crown, Piotr of Kurozwęki. It was at that time that the church was expanded and a monastery built next to it. In 1827 the parish church and monastery were turned into a shelter for the elderly.

The church complex is a dominant landmark in the landscape of Kurozwęki. It's built from stone and brick in a Gothic style, with later Renaissance and Baroque alterations – therefore its form is an amalgamation of various styles, making it quite unique and interesting. The church can be accessed through a Baroque gate topped with a pitched roof.

The oldest remaining parts of the church are in its sanctuary, which was built in the latter half of the 15th century. It is double span, closed polygonally, with sacristy and a money box in its northern part, above which lies a room of the former library. There is a neo-Gothic chapel tomb of the Popiel family, dating back to 1872, at the extension of the chancel from the east. The nave was probably made in 1487; it is three-bay with a chapel of the Five Holy Wounds of Christ.

The church's main altar was made at the beginning of 17th century, in a late-Renaissance style with later additions and with two Rococo gates. Those gates have two paintings: Mary with Child, a 1648 Baroque painting dressed in silver and crowned; and Mary with Child and St. Anthony, late-Baroque from the 18th century.

The chapel of the Five Holy Wounds of Christ was built at the beginning of 17th century, in a late-Renaissance style on its exterior. On the interior, the dome and portal are in Baroque style and were built in the latter half of 17th century. The chapel's construction was funded by the Lanckoroński family, whose family tomb lies beneath the chapel.

The main altar in the chapel is made of marble, with stocco sculptures of angels. At its center there is a late-Gothic painting Vir Dolorum with Virgin Mary and John the Evangelist. Also depicted at the altar are Saint Stanislaus of Kazimierz and a St. Augustine monk. There are also two side altars which were made at the beginning of the 18th century in a late-Baroque style and were consecrated in 1728. The left side altar holds a painting of Virgin Mary and Saint Joseph Adoring The Child.

Former monastery is mostly styleless with several Gothic and Baroque architectural elements. It is one-story, made with brick. In 1845 the monastery was turned into a shelter for the elderly. At the monastery's courtyard there is a late-Baroque statue of Saint Stanislaus of Kazimierz, Canon Regular of the Lateran. The statue was made in 1776.