Assumption of Mary Church in Koniemłoty 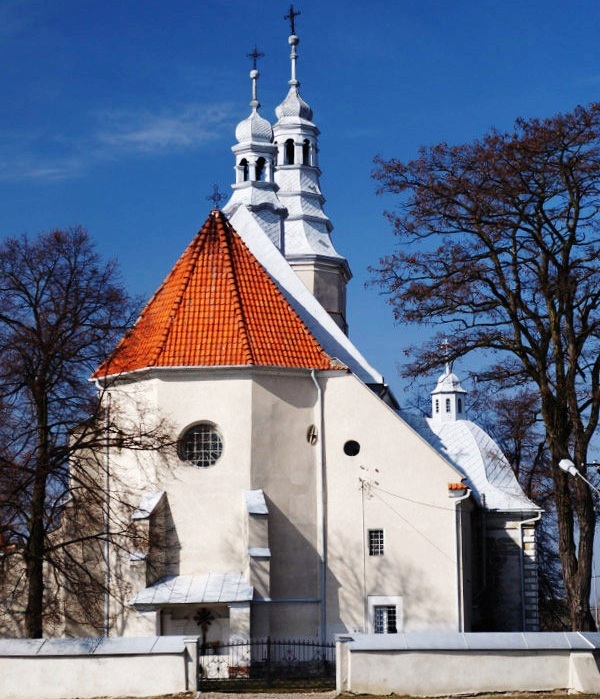 Koniemłoty is one of the oldest villages in the Municipality of Staszów. Its history dates back to the times of king Bolesław Chrobry, who bestowed this village upon the Order of Saint Benedict monks from the Holy Cross Monastery. The parish of Koniemłoty has continuously existed since the 14th century.

No trace remains of the original, wooden church. A brick church was built in years 1637-1649 in a late-Renaissance style, its construction funded by a St. Benedict monk, Łukasz Sokołowski. There were two later additions to the church's structure: a Baroque tower, built in 1708 and a chapel, built in 1732. After a fire in 1770 the church was restored and altered once again. The church's sanctuary is its most interesting part. It rests upon Gothic framework, topped with a vault with lunettes embroided with Kalisz-Lublin-style embellishments. Overall architectural style of the church is described as being either late Renaissance, early Baroque or Gothic-inspired. The church is comprised three naves.

A distinctive feature of the building is its 260-meters tall tower with an accompanying round bastille.

The church's presbitery is a former cloister of the Holy Cross St. Benedict monks. It was built in 1667 and stands right next to the church. There used to be a covered passage between the two buildings. In 1825 the cloister was rebuilt and repurposed into a presbitery. The building is one-story. facing east, made of stone brick, with a basement.