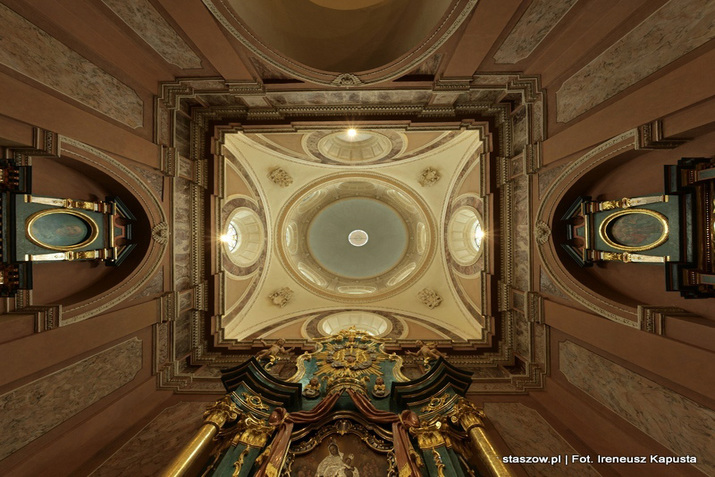 Also known as the Tęczyński Chapel, the Holy Rosary Chapel was built in years 1610-1625 thanks to the efforts of Katarzyna Leszczyńska–Tęczyńska. The chapel is attached to the St. Bartholomew Church and it is one of Staszów's most valuable monuments. The chapel also contains a mausoleum of Katarzyna Tęczyńska's husband and son.

Its architecture represents a moderate Mannerism movement called the Kraków-Pińczów Mannerism, while at the same time referencing the style of Santi Gucci – a royal sculptor and architect. The Chapel is built on a square plane, topped with a dome and a richly encrusted ornate hanging lantern. The chapel is octagonal on the exterior and rounded on the interior. The illusion of a very high ceiling is reinforced by slightly angular walls.

Each wall has a circular window. A corbel cornice with ornately prominent beams leads to the dome with a cross steeple. Entrance to the chapel is located inside the St. Bartholomew Church, on its left side, between a Rococo pulpit with evangelist bas-reliefs and a sixteenth-century altar with a Saint Hyacinth painting.

The main, Baroque altar was created in the latter half of 17th century, in years 1770-1780. The altar's painting depicts Rosary Virgin Mary and Child with St. Dominic and St. Rose of Lima. To the right of the altar there is a painting of St. Rosalia, Sebastian and Barbara, to the left there is another altar with a painting of St Joseph – both of them Renaissance paintings.

Inner window garnishing is made of marble, while white sandstone was used to sculpt family crests of the Leszczyński and Tęczyński families. The chapel's interior is decorated with tripartite arcade pilasters and the entire dome is richly sculpted.