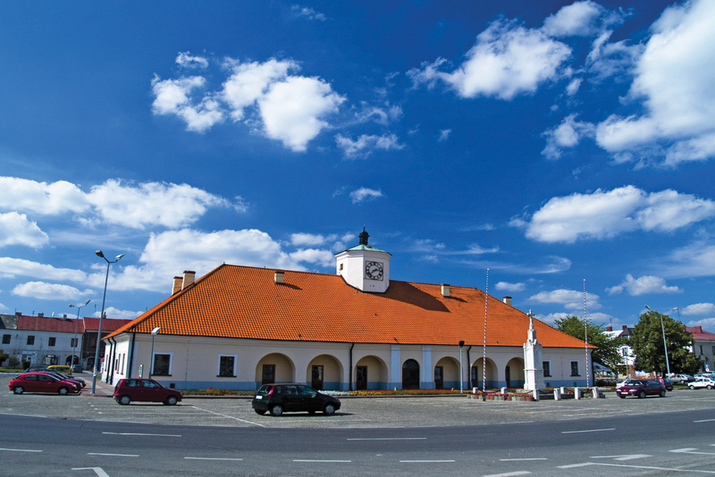 Located at the center of the Market Square, the Town Hall is Staszów's primary landmark and its most recognizable building. It was built in the first half of the 17th century in Classic style of architecture, its construction ordered by Aleksander Czartoryski. It is a one-story, symmetrical brick building built on a square plan. It has wide hallways and a high, hipped, tiled roof. The building also has a clock tower (which used to be twice as high).

The distinct arcades, sometimes referred to as "miniature Kraków Cloth Hall", definitely make the building more aesthetically appealing. There are numerous other elements of the original architecture still remaining in the building, for example its triple-layered vaults. There is a barrel vault with lunettes under the hallway, entryway and rooms near the arcades; a groin vault with clock tower; and a dome vault with belts.

Town Hall originally functioned as headquarters for the local authorities. It was also a business and gastronomic centre, hence its moniker "kramnice" ("the booth halls").

This building used to belong to private owners for a long time; it was only during the interwar period that it was reclaimed by the town's authority. Currently Staszów's Town Hall houses the "Pod Zegarem" restaurant, the Public Library, and the art gallery "Punkt" which belongs to the Staszów Culture Center.